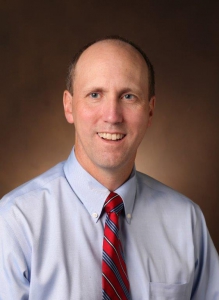 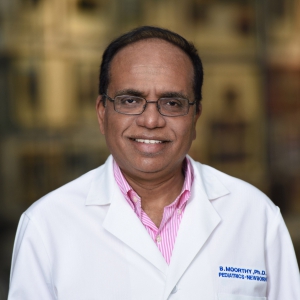 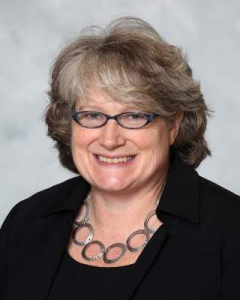 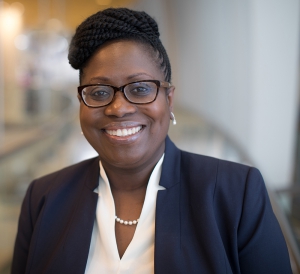 Dr. Paul Moore is a graduate of Vanderbilt University and Harvard Medical School, where he also completed his Pediatrics residency and Pediatric Pulmonary fellowship at Children’s Hospital, Boston. Dr. Moore joined the faculty of the Vanderbilt University School of Medicine in the Department of Pediatrics in 2001 and went on to become the Director of the Division of Pediatric Allergy, Immunology, and Pulmonary Medicine in 2009. Dr. Moore remains interested in a broad range of pulmonary diseases, including asthma and bronchopulmonary dysplasia (BPD) related to prematurity. He is a co-investigator on 2 NIH studies funded through the Environmental Influences on Child Health Outcomes (ECHO) Program, in which longitudinal birth cohorts are being followed through school age to assess respiratory outcomes. He also currently serves at Chair of the Pediatrics Assembly of the American Thoracic Society.

Dr. Bhagavatula Moorthy, PhD, is Professor of Pediatrics at Baylor College of Medicine, Houston, TX. He is also the Director of the Neonatology Research Program at Baylor. He earmed his BS in Biology from the Madras University, India (1979), MS in Biochemistry from the Andhra University, India (1982), and PhD in Bio-Organic Chemistry from the Indian Institute of Science, India (1988). He joined the Department of Biochemistry, Medical College of Wisconsin in 1998, wherein he worked on the regulation of cytochrome P450 enzymes incoved in the metabolism of Vitamin D (1988-90). In 1990 he moved to Department of Pharmacology at Baylor College of Medicine, Houston, TX, as a Research Associate, where he worked on characterizing DNA adducts from benzo[a]pyrene (BP) and other polycyclic aromatic hydrocarbons (PAHs) in vivo in animal models and also their role in carcinogenesis. He applied the highly sensitive 32P-postlabeling technique to study PAH-DNA adducts, which are important benchmarks for human risk assessment. He was promoted to Instructor and Research Assistant Professor in 1992 and 1994, respectively. He joined the Section of Neonatology, in the Department of Pediatrics at Baylor in 1995 as an Assistant Professor. He was promoted to Associate Professor in 2002, and earned tenure in 2005. He was promoted to Professor (tenured) in 2011. His major areas of focus is on the mechanisms of hyperoxic lung injury in relation to bronchopulmonary dysplasia (BPD) in premature infants and ARDS in children and adults. He is also working on the molecular mechanisms of carcinogenesis mediated by PAHs including BP. He has published numerous peer-reviewed articles (>110), and many of these pertain to the metabolism of PAHs in relation to carcinogenesis, and on hyperoxic lung injury, and he has had multiple RO1 grants on the regulation of cytochrome P4501A and 1B1 enzymes by PAHs and hyperoxia. Based on his research and teaching accomplishments, he was appointed the Kurt Randerath MD Endowed Chair at the Texas Children’s Hospital in August 2019. Effectve February 1, 2020, he will be Director of the National Institute of Environmental Health Sciences (NIEHS) funded Supefund Research Program at Baylor College of Medicine. He has reviewed numerous papers in the area of PAH metabolism, and has served on numerous NIH panels that review grants related to PAHs. He is currently Associate Editor of Toxicology and Applied Pharmacology (TAAP). He has served on many Editorial Boards of Journals, including Environmental Health Perspectives; Toxicology Letters, Journal of Chromatography, and Journal of Carcinogenesis and mutagenesis, and Internarional Journal of Molecular Sciences. He is member of many professional societies including the Society of Toxicology, American Association for Cancer Research, Society for Pediatric Research, American Society for Pharmacology and Experimental Therapeutics, the American Pediatric Society, etc. He was President, Gulf Coast Regional Chapter of SOT, and the Molecular Biology Specialty Section of the SOT. He received the Outstanding Research Teacher Award in the Department of Pediatrics, Baylor College of Medicine, 2007 and 2017. He also received the Fulbright and Jaworski Faculty Excellence Award for teaching at Baylor College of Medicine, 2007. He is the recipient of the AstraZeneca Travel lectureship award of the SOT (2012).

Dr. Mary A. Ott MD MA is a Professor of Pediatrics in the IU School of Medicine and Adjunct Professor of Philosophy at IUPUI.  Her areas of expertise are adolescent pregnancy and HIV prevention, pediatric research ethics, and adolescent consent and confidentiality.  Her research includes implementation sciences approaches to community-based adolescent pregnancy prevention, adolescent contraceptive access, research ethics with vulnerable populations, and global adolescent health.  Her work is funded by the NIH, the Society for Family Planning Research, the Robert Wood Johnson Foundation and the Patient Centered Outcomes Research Institute (PCORI).  She is currently a member of the Robert Wood Johnson Foundation’s Interdisciplinary Research Leaders.

Suzette Oyeku, MD, MPH, is Chief of the Division of Academic General Pediatrics at the Children’s Hospital at Montefiore (CHAM). She is a Professor of Pediatrics at the Albert Einstein College of Medicine. Dr. Oyeku manages the clinical, research, advocacy and educational missions of the division in addition to being responsible for faculty/staff development. Dr. Oyeku is a general pediatrician with expertise in health services research, implementation science and the use of quality improvement methods to disseminate effective care strategies and improve care and patient outcomes for children with chronic diseases such as sickle cell disease. Dr. Oyeku is also actively engaged in community education activities and serves as an ordained deacon at Grace Baptist Church in Mount Vernon, NY.